Life in the rain forest is interrupted when the intruders arrive to destroy it. Unaware that one of their own has betrayed them, the villagers are unable to protect it until an unexpected ally uses her powers to help them. 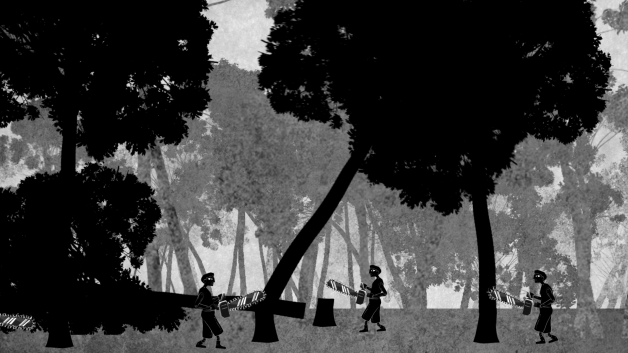 The intruders are determined to destroy the centuries-old forest in a single day.

SHADOWS: Saving the Rain Forest is a contemporary tale of magical realism about preserving the world’s forests. The animated short is inspired by the fantasy of ancient legends and shadow puppets, particularly wayang kulit from Southeast Asia where the team is based. The short also highlights the positive role that traditional legends and active communities can have in preserving the world’s natural resources. The story features a rain forest, villagers, a gang of invaders, and a few fantastical creatures.

SHADOWS is a fantasy animated short with a total running time of 12 minutes, including titles and credits. The short is rendered mostly in monochromatic tones and some color, and it has no dialogue. The innovative visual style of SHADOWS stems from its minimalist and seamless integration of computer simulation (CG) techniques with traditional two-dimensional handmade cutout figures. The action is animated in a style that combines traditional puppet limited animation with realistic accents of contemporary character animation.